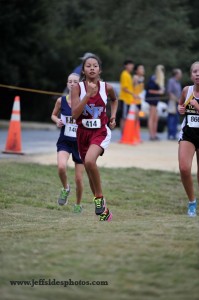 Sophomore Andy Romero and the North Forsyth boys weren’t predicted to finish in the top 20 team finishes, but in a race filled with cheering fans, mud and steep competition they got to the finish in a team overall finish of 13th, at the Beeson Invitational 5K race over the weekend.

Romero, who has been doubling as a starter on the soccer team, gained some respect from more seasoned runners with a strong second loop and finished in 16:59—more than 90 seconds faster than anyone in the last three seasons at North, taking fourth.  For a moment in the first part of the race it appeared that the novice runner had a good shot at winning but there was definitely a strong group of guys up front.  Coming down the home stretch of the fast course, Andy seemed in command of getting through the line in third place, only to be bested by a surprise surge at the last 50m.

For the Lady Vikings, senior Jasmine Romero finished first for North in a personal best time of 23:15, almost a minute faster than her previous best.  After feeling disappointed by her last performance, Romero figured that with a little more patience, her goal of breaking her personal record would depend on staying in front of teammates Zulem Hernandez and freshman Vanessa Herrera.

While Zulem continues to get better, it was Vanessa’s performance that surprised her coaches.  It is hard enough to get out there for the first time in a small meet, but when your first ever high school cross country meet turns out to be one of the largest, you’d expect it to overwhelm a new runner.  Vanessa however showed the maturity of a veteran runner by maintaining her composure and propelling herself to the number three spot on the varsity team.  Overall the girls also produced several personal bests.

Alternatively, if you do not have an account yet you can create one here.